Back to top Sales enquiry

Strainstall Malaysia was commissioned to devise and implement a test methodology to measure the deflection of a road bridge over the Klang River in Kuala Lumpur’s new Eco City development. 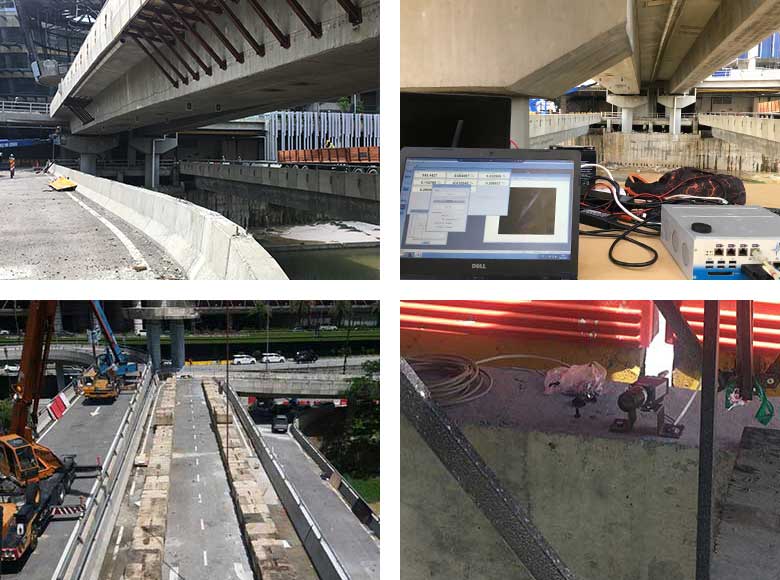 The bridge in question was struck by an overhead pedestrian bridge in December 2016. As part of remedial works a test was required to confirm the bridge conformed to design responses and to ascertain deflections under a known load.

For this application a load test was devised that was specific to this location and infrastructure, in conjunction with the project consultants, Arup Jururunding Sdn Bhd.

The solution centred around five strategic points across the underside of the bridge in order to measure displacement under load. This included ten deflection monitoring points, using six Digital Image Correlation (DIC) video gauge targets on the soffit of the bridge, four displacement transducers at the bridge supports and three thermistor temperature sensors.

DIC Targets were placed at ½ span and 1/3 span to give a clear indication of deflection across the entire deck.  Linear Variable Differential Transformer (LVDT) sensors were installed at the supports to monitor the bearing effects. The sensor array was accompanied by a video camera and DataTaker logging system to record all data gathered during testing.

Loading of the bridge took place over three days, with the overall loading being increased on a daily basis. Once the full load was successfully applied, this was held for a period of 24 hours to confirm the static effects of the loading on the bridge had settled. During loading operations, the bridge was monitored continually, with all resultant data logged for reporting. During the hold periods, data was sampled every 15 minutes to capture the effects of cooling temperature on the bridge.

At this stage, the complete load was then removed whilst the DIC system continued to measure deflection to ensure the bridge returned to its original state, providing a comprehensive dataset from which to produce the testing report.

Following the decommissioning of the temporary monitoring system, data analysis was carried out by the Strainstall team with a report and presentation of data to the client. This analysis concluded that deflections due to loading were less than allowable deflection at mid-span, confirming the bridge was performing as required and was in a safe state of operation for commissioning to take place.

Key benefits of our service

By choosing Strainstall to deliver the load test, the client benefited from an integrated service, including a site-specific test methodology, the provision of personnel and instrumentation to complete the test and post-testing data analysis and reporting. Conventional methods of using a total station provide accuracies of 1-2mm which would not be good enough for this application and the use of LVDT’s was not possible under the current budget, because of the bridge spanning the Klang River. The test regime was undertaken over a three-day period, offering an efficient, reliable and safe means to determine the deflection of the bridge.